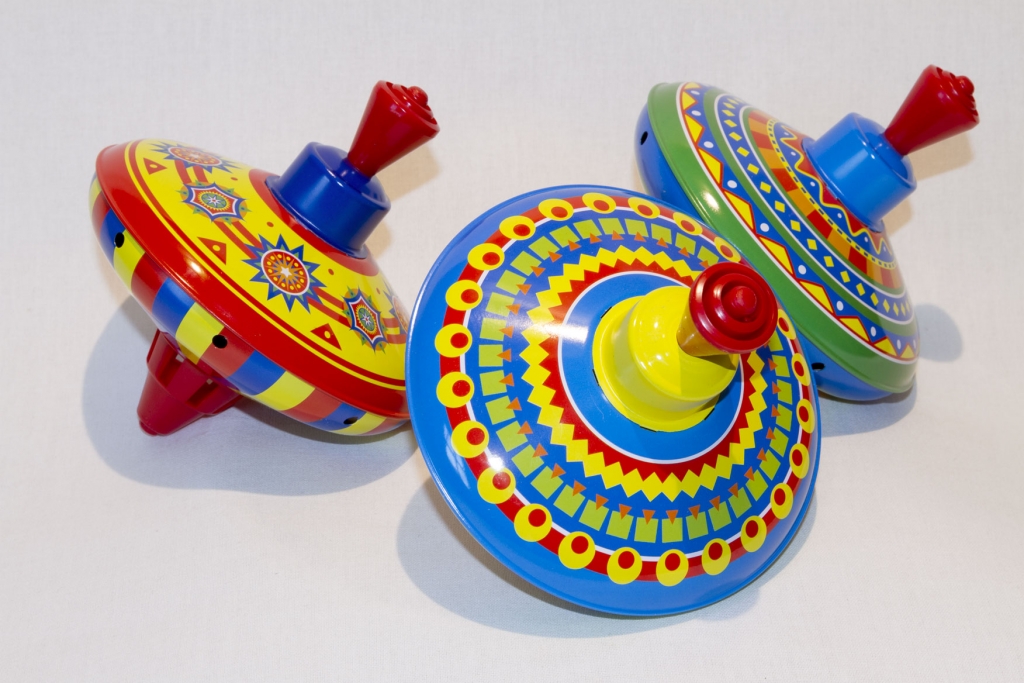 The Brummkreisel is a nostalgic tin toy. The inventor of the musical top was Mr. Wilhelm Simon from Nuremberg. The patent No. 7096 for it was granted on 11.09.1879. The company Lorenz Bolz in Zirndorf, existing since 1880, patented the drill rod in 1913. With this invention the classic line gyro was replaced.
A metal rod with a wooden handle (today mostly made of plastic), around which grooves wind like a helical screw, is pressed into the spinning top. The gripper reaches into the recesses in the gyro head. The thread rotates the gyro, which continues to rotate even when the screw spindle is raised again, as a freewheel is formed.
By pumping again, the rotor is accelerated, and the faster it turns, the louder it "sings". This is made possible by small incisions, which are made where the sheet metal body of the gyro is the largest. As soon as the gyro rotates, the air is ejected from its interior by centrifugal force. At the same time, air flows in through openings below the base of the gyro to compensate for the negative pressure formed in the gyro. The small metal tongues attached to these holes vibrate through the air stream and cause the gyro to hum.
There are different spinning tops, so-called chorale spinning tops, in which, similar to a harmonica, reeds with different pitch are attached. A loosely lying cardboard disc, which is provided with slots, releases alternating reeds by the rotation with the reduction gear. Such a choral gyro can produce up to 20 different tones and play simple children's songs. This type of gyro was also invented by the company Lorenz Bolz. The reduction gear was patented by Bolz in 1937. (Text: Wikipedia)